A decade ago China began opening centres abroad to promote its culture. Some people are pushing back

“HARMONY is the most valuable of all things,” said the Chinese philosopher Confucius two and a half millennia ago. There is little of it in evidence in the frosty relationship between the woman who was the founding director of the Confucius Institute at the University of Oregon, Bryna Goodman, and her fellow historian,Glenn May. Their offices are separated by a ten-second walk, but the scholars do not exchange visits. Their palpable ill feeling reflects growing discord among Western scholars about a decade-old push by China to open government-funded cultural centres in schools and universities abroad. Intended to boost China’s “soft power”, the centres take the name of the peace-espousing sage. They tap into growing global demand for Chinese-language teaching. But they are also fuelling anxiety about academic freedom.

In America the Confucius programme has been widely welcomed by universities and school districts, which often do not have enough money to provide Chinese-language teachers for all who need them. But critics like Mr May believe China’s funding comes at a price: that Confucius Institutes (as those established on university campuses are known) and school-based Confucius Classrooms restrain freedom of speech by steering discussion of China away from sensitive subjects.

In June the American Association of University Professors called for universities to end or revise their contracts with Confucius Institutes (America has 100 of them)because they “function as an arm of the Chinese state and are allowed to ignore academic freedom”. Mr May has been asking the University of Oregon to close its institute, to no avail. Ms Goodman (who is no longer the institute’s director)says that in funding its interests China is like any other donor to American universities. She says that the institutes have become lodestones of what she calls a “China fear”.

When China opened its first Confucius Institute in 2004 in Seoul, it hoped the new effort would prove as uncontroversial as cultural-outreach programmes sponsored by Western governments, such as the British Council, the Alliance Française and Germany’s Goethe-Institut. The idea was to counter fears of China’s rise by raising awareness of a culture that is often described by Chinese as steeped in traditions of peace. 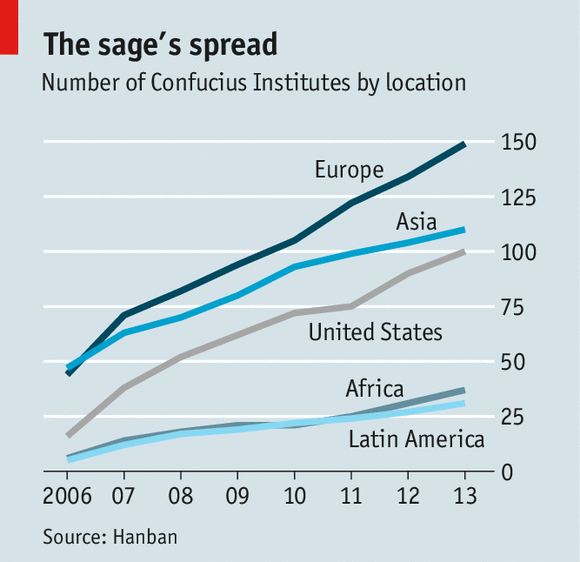 Through the Hanban, a government entity, China provides the centres with paid-for instructors and sponsors cultural events at them. Its spending is considerable,and growing rapidly. In 2013 it was $278m, more than six times as much as in2006. China’s funding for Confucius Institutes amounts to about $100,000-200,000a year on many campuses, and sometimes more (Oregon received nearly $188,000 in the last academic year). By the end of 2013 China had established 440institutes and 646 classrooms serving 850,000 registered students. They are scattered across more than 100 countries, with America hosting more than 40% of the combined total. There are plans for another 60 institutes and 350classrooms to be opened worldwide by the end of 2015.
Chinese officials express satisfaction. In June Liu Yunshan, who is in charge of the Communist Party’s vast propaganda apparatus, said Confucius Institutes had“emerged at the right moment”. He described them as a “spiritual high-speed rail”, promoting friendship by connecting Chinese dreams with those of the rest of the world.

Others are less sanguine, however. In America criticism has recently grown stronger.Earlier this year more than 100 members of the faculty at the University of Chicago complained that Confucius Institutes were compromising academic integrity. In an article published in 2013 by Nation magazine, one of the university’s academics, Marshall Sahlins, listed cases in several countries involving what appeared to be deference to the political sensitivities of Confucius Institutes. These included a couple of occasions when universities had invited the Dalai Lama to speak and then either cancelled the invitation or received him off-campus.

In one case,at North Carolina State University in 2009, the provost said after the cancellation of a Dalai Lama visit that the Confucius Institute had indicated the exiled Tibetan’s presence could cause problems with China. This year Steven Levine, an honorary professor at the University of Montana, wrote to hundreds of Confucius Institutes around the world asking them to mark the 25th anniversary in June of the violent suppression of the Tiananmen Square protests. None of them agreed. Global Times, a Beijing newspaper, recently called the protests of foreign academics “a continuation of McCarthyism”.
Ms Goodman argues that the study of China needs all the funding it can get, even if that means taking money from countries with vital interests at stake—whether China,Taiwan, or the United States. She says that if China were ever to meddle politically in Oregon’s institute, the Confucius programme would be quickly shut down.

Such assurances do not address a big concern of critics—that the political influence of Confucius programmes is often subtle and slow-acting. If the critics are right, it is very subtle indeed. Surveys suggest that in many countries China’s image has not markedly improved over the past decade. The Pew Research Centre,an American polling organisation, says 42% of Americans viewed China favourably in 2007. Last year only 37% did. The political dividends of China’s soft-power spending are far from obvious.
Posted by 混沌 at 上午10:29