A far-reaching new study suggests a staggering $21tn in assets has been lost to global tax havens. If taxed, that could have been enough to put parts of Africa back on its feet – and even solve the euro crisis 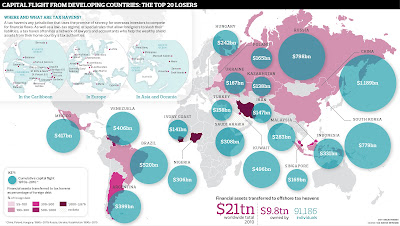 The world's super-rich have taken advantage of lax tax rules to siphon off at least $21 trillion, and possibly as much as $32tn, from their home countries and hide it abroad – a sum larger than the entire American economy.

James Henry, a former chief economist at consultancy McKinsey and an expert on tax havens, has conducted groundbreaking new research for the Tax Justice Network campaign group – sifting through data from the Bank for International Settlements (BIS), the International Monetary Fund (IMF) and private sector analysts to construct an alarming picture that shows capital flooding out of countries across the world and disappearing into the cracks in the financial system.

Comedian Jimmy Carr became the public face of tax-dodging in the UK earlier this year when it emerged that he had made use of a Cayman Islands-based trust to slash his income tax bill.
But the kind of scheme Carr took part in is the tip of the iceberg, according to Henry's report, entitled The Price of Offshore Revisited. Despite the professed determination of the G20 group of leading economies to tackle tax secrecy, investors in scores of countries – including the US and the UK – are still able to hide some or all of their assets from the taxman.

"This offshore economy is large enough to have a major impact on estimates of inequality of wealth and income; on estimates of national income and debt ratios; and – most importantly – to have very significant negative impacts on the domestic tax bases of 'source' countries," Henry says.

Using the BIS's measure of "offshore deposits" – cash held outside the depositor's home country – and scaling it up according to the proportion of their portfolio large investors usually hold in cash, he estimates that between $21tn (£13tn) and $32tn (£20tn) in financial assets has been hidden from the world's tax authorities.

"These estimates reveal a staggering failure," says John Christensen of the Tax Justice Network. "Inequality is much, much worse than official statistics show, but politicians are still relying on trickle-down to transfer wealth to poorer people.

"This new data shows the exact opposite has happened: for three decades extraordinary wealth has been cascading into the offshore accounts of a tiny number of super-rich."
In total, 10 million individuals around the world hold assets offshore, according to Henry's analysis; but almost half of the minimum estimate of $21tn – $9.8tn – is owned by just 92,000 people. And that does not include the non-financial assets – art, yachts, mansions in Kensington – that many of the world's movers and shakers like to use as homes for their immense riches.

"If we could figure out how to tax all this offshore wealth without killing the proverbial golden goose, or at least entice its owners to reinvest it back home, this sector of the global underground is easily large enough to make a significant contribution to tax justice, investment and paying the costs of global problems like climate change," Henry says.

He corroborates his findings by using national accounts to assemble estimates of the cumulative capital flight from more than 130 low- to middle-income countries over almost 40 years, and the returns their wealthy owners are likely to have made from them.
In many cases, , the total worth of these assets far exceeds the value of the overseas debts of the countries they came from.

The struggles of the authorities in Egypt to recover the vast sums hidden abroad by Hosni Mubarak, his family and other cronies during his many years in power have provided a striking recent example of the fact that kleptocratic rulers can use their time to amass immense fortunes while many of their citizens are trapped in poverty.

The world's poorest countries, particularly in sub-Saharan Africa, have fought long and hard in recent years to receive debt forgiveness from the international community; but this research suggests that in many cases, if they had been able to draw their richest citizens into the tax net, they could have avoided being dragged into indebtedness in the first place. Oil-rich Nigeria has seen more than $300bn spirited away since 1970, for example, while Ivory Coast has lost $141bn.

Assuming that super-rich investors earn a relatively modest 3% a year on their $21tn, taxing that vast wall of money at 30% would generate a very useful $189bn a year – more than rich economies spend on aid to the rest of the world.

The sheer scale of the hidden assets held by the super-rich also suggests that standard measures of inequality, which tend to rely on surveys of household income or wealth in individual countries, radically underestimate the true gap between rich and poor.

Milorad Kovacevic, chief statistician of the UN Development Programme's Human Development Report, says both the very wealthy and the very poor tend to be excluded from mainstream calculations of inequality.

"People that are in charge of measuring inequality based on survey data know that the both ends of the distribution are underrepresented – or, even better, misrepresented," he says.
"There is rarely a household from the top 1% earners that participates in the survey. On the other side, the poor people either don't have addresses to be selected into the sample, or when selected they misquote their earnings – usually biasing them upwards."

Inequality is widely seen as having increased sharply in many developed countries over the past decade or more – as described in a recent paper from the IMF, which showed marked increases in the so-called Gini coefficient, which economists use to measure how evenly income is shared across societies.

Globalisation has exposed low-skilled workers to competition from cheap economies such as China, while the surging profitability of the financial services industry – and the spread of the big bonus culture before the credit crunch – led to what economists have called a "racing away" at the top of the income scale.

However, Henry's research suggests that this acknowledged jump in inequality is a dramatic underestimate. Stewart Lansley, author of the recent book The Cost of Inequality, says: "There is absolutely no doubt at all that the statistics on income and wealth at the top understate the problem."

The surveys that are used to compile the Gini coefficient "simply don't touch the super-rich," he says. "You don't pick up the multimillionaires and billionaires, and even if you do, you can't pick it up properly."

In fact, some experts believe the amount of assets being held offshore is so large that accounting for it fully would radically alter the balance of financial power between countries. The French economist Thomas Piketty, an expert on inequality who helps compile the World Top Incomes Database, says research by his colleagues has shown that "the wealth held in tax havens is probably sufficiently substantial to turn Europe into a very large net creditor with respect to the rest of the world."

In other words, even a solution to the eurozone's seemingly endless sovereign debt crisis might be within reach – if only Europe's governments could get a grip on the wallets of their own wealthiest citizens.


A global super-rich elite has exploited gaps in cross-border tax rules to hide an extraordinary £13 trillion ($21tn) of wealth offshore – as much as the American and Japanese GDPs put together – according to research commissioned by the campaign group Tax Justice Network.
James Henry, former chief economist at consultancy McKinsey and an expert on tax havens, has compiled the most detailed estimates yet of the size of the offshore economy in a new report, The Price of Offshore Revisited, released exclusively to the Observer.

He shows that at least £13tn – perhaps up to £20tn – has leaked out of scores of countries into secretive jurisdictions such as Switzerland and the Cayman Islands with the help of private banks, which vie to attract the assets of so-called high net-worth individuals. Their wealth is, as Henry puts it, "protected by a highly paid, industrious bevy of professional enablers in the private banking, legal, accounting and investment industries taking advantage of the increasingly borderless, frictionless global economy". According to Henry's research, the top 10 private banks, which include UBS and Credit Suisse in Switzerland, as well as the US investment bank Goldman Sachs, managed more than £4tn in 2010, a sharp rise from £1.5tn five years earlier.

The detailed analysis in the report, compiled using data from a range of sources, including the Bank of International Settlements and the International Monetary Fund, suggests that for many developing countries the cumulative value of the capital that has flowed out of their economies since the 1970s would be more than enough to pay off their debts to the rest of the world.

Oil-rich states with an internationally mobile elite have been especially prone to watching their wealth disappear into offshore bank accounts instead of being invested at home, the research suggests. Once the returns on investing the hidden assets is included, almost £500bn has left Russia since the early 1990s when its economy was opened up. Saudi Arabia has seen £197bn flood out since the mid-1970s, and Nigeria £196bn.

The sheer size of the cash pile sitting out of reach of tax authorities is so great that it suggests standard measures of inequality radically underestimate the true gap between rich and poor. According to Henry's calculations, £6.3tn of assets is owned by only 92,000 people, or 0.001% of the world's population – a tiny class of the mega-rich who have more in common with each other than those at the bottom of the income scale in their own societies.

"These estimates reveal a staggering failure: inequality is much, much worse than official statistics show, but politicians are still relying on trickle-down to transfer wealth to poorer people," said John Christensen of the Tax Justice Network. "People on the street have no illusions about how unfair the situation has become."

TUC general secretary Brendan Barber said: "Countries around the world are under intense pressure to reduce their deficits and governments cannot afford to let so much wealth slip past into tax havens.

"Closing down the tax loopholes exploited by multinationals and the super-rich to avoid paying their fair share will reduce the deficit. This way the government can focus on stimulating the economy, rather than squeezing the life out of it with cuts and tax rises for the 99% of people who aren't rich enough to avoid paying their taxes."

Assuming the £13tn mountain of assets earned an average 3% a year for its owners, and governments were able to tax that income at 30%, it would generate a bumper £121bn in revenues – more than rich countries spend on aid to the developing world each year.

Groups such as UK Uncut have focused attention on the paltry tax bills of some highly wealthy individuals, such as Topshop owner Sir Philip Green, with campaigners at one recent protest shouting: "Where did all the money go? He took it off to Monaco!" Much of Green's retail empire is owned by his wife, Tina, who lives in the low-tax principality.

A spokeswoman for UK Uncut said: "People like Philip Green use public services – they need the streets to be cleaned, people need public transport to get to their shops – but they don't want to pay for it."

Leaders of G20 countries have repeatedly pledged to close down tax havens since the financial crisis of 2008, when the secrecy shrouding parts of the banking system was widely seen as exacerbating instability. But many countries still refuse to make details of individuals' financial worth available to the tax authorities in their home countries as a matter of course. Tax Justice Network would like to see this kind of exchange of information become standard practice, to prevent rich individuals playing off one jurisdiction against another.

"The very existence of the global offshore industry, and the tax-free status of the enormous sums invested by their wealthy clients, is predicated on secrecy," said Henry. 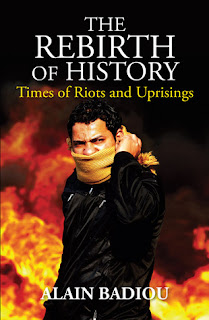 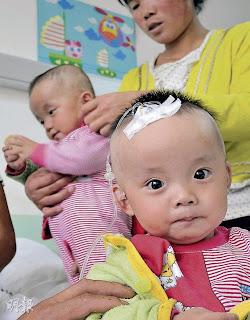