Nearer My God to Thee (for 9 cellos)

You who take away the sins of the world

You who take away the sins of the world 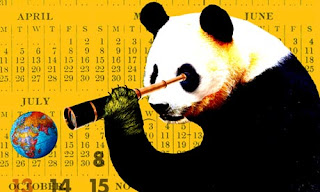 A very merry Reviewtide to you all. We are, of course, in the days between Christmas and new year: season of reviews of the year, quizzes of the year, people of the year, lists of the year and predictions for next year. I can't be sure that this is the perfect pairing for the increasingly attritional diet of leftovers and Chocolate Oranges that constitutes so much of our intake at this time in the calendar, but the news sommeliers have decreed it must be thus so long ago that you might as well argue against gravity as try to resist.

It is a time for reflection. Which is to say a time to wonder vaguely whether having 20-20 memory on how many days Kim Kardashian's marriage lasted, but having forgotten the order in which Libyan cities fell to the rebels, counts as displacement activity – or just early onset nihilism.

Occasionally, North Korea will get up a state funeral to oblige the reader, but very little cuts through the enforced Looking Back, and not much more through the Looking Forward. Even Nick Clegg – now polling somewhere near negative infinity – has been firing out sub-reflective video messages into the encircling darkness, warning that "the next year will be one that poses many great challenges for everyone in Britain". Whether the deputy PM reached the comic heights of Enver Hoxha's new year address in 1967 is debatable. "This year will be harder than last year," the Albanian leader informed his people. "It will, however, be easier than next year."

The trouble is that this year's news had such a thick-and-fast quality to it that it already felt like living through a review of a year, if not a review of a decade. The experience of reading it in telescoped-down form in an actual review of the year is so dizzying that editors should probably cover-mount motion sickness pills.

Yet such a voluminous staple has Reviewtide become that the next logical step should see it recognised as a version of news itself, and reviewed accordingly. A few years ago, the awards industry inaugurated the Awards Awards. Far from being an Onion headline, this was a genuine awards ceremony designed to recognise the best awards ceremonies of the year. So let us hope it is not long before a meta-layer of sifting and ranking is added to Reviewtide. Indeed, were I to risk a 2012 prediction other than "the news will get even bigger", it would be that next year will see the inaugural Review of the Reviews of the Year, in which a big name writer like Martin Amis or maybe Katie Price delivers a several thousand-word review of the reviews of the year.

Many of us already have our Person of the Year of the Year for 2011, after the BBC this week decided to winsomely give one of its women of the year slots to a panda. Meanwhile, in a time-pressed media increasingly dominated by lists, List of the Year of the Year is a helluva crowded field. But I'd settle on a press release from the Simon Wiesenthal Centre, headlined "Top 10 Antisemitic Slurs of 2011". On first glance I assumed the document to be a parody, but it seems the modern mania for ranking things in lists of 10 really has spread to the business of chronicling antisemitism. Alas, it was impossible not to imagine the countdown being delivered in Smashie and Nicey tones – "at four, it's John Galliano with the hot rockin' 'I love Hitler'" – but I suppose the centre must be congratulated for finding a new way to deploy this most knackered of media devices.

Prediction-wise, you can scarcely move for publications crowing that they foresaw various tech trends, but on Arab springs and Bin Laden takedowns and the like there are rather more studied silences. Obligingly, Foreign Policy magazine has dredged up some of the worst predictions of the year, which include corkers such as Hillary Clinton's January assessment that "the Egyptian government is stable and is looking for ways to respond to the legitimate needs and interests of the Egyptian people". But the publication graciously acknowledges that even geniuses can get it wrong, as evidenced by Thomas Edison's 1911 predictions for the year 2011. Edison confidently predicted that alchemy – "the secret of transmuting metals" – would have been cracked by 2011. "In the magical days to come," he speculated of 2011, "there is no reason why our great liners should not be of solid gold from stem to stern." Well, you can't win 'em all. Edison does seem to have foreseen an approximation of the electronic reader, though, declaring that books will be printed on nickel pages "so light to hold that the reader can enjoy a small library in a single volume".

However, Prediction of the Year of the Year would surely go to Harold Camping – the evangelical broadcaster who in 2011 contrived to fail to predict the end of the world not once, but twice. All that remains is to wish a merry Reviewtide to Harold, given he is likely to have been one of its stars, and to wonder idly whether the end of the world would really be so bad if it meant not having to suffer this media season ever again.

FT Editorial:Leader - The march of democracy

In 1989, Francis Fukuyama declared that democracy would eventually emerge as the universal form of human government. The intervening years have given ample ammunition to those who disagree. Indeed, the inexorable rise of China has led some to dismiss democracy’s messy compromises in favour of authoritarian efficiency. People are prepared to sacrifice their freedoms, the argument runs, as long as the system under which they live can deliver economic growth.

The tumultuous events of 2011 have undermined this idea. Across the Arab world – a region once held to be indifferent to the attractions of democracy – long-oppressed peoples have risked everything to free themselves from the grasp of authoritarian regimes. In Tunisia, Egypt, Libya and Ye­men, brutal tyrants were triumphantly toppled. And although Bas­har al-Assad has so far clung on in Syria, his grip on the country has been weakened by months of protests.
Of course, the optimism should not be overplayed. The North African revolutions have not yet spawned fully-fledged democracies. Tunisia may have elected its first parliament, but the ongoing elections in Egypt have been marred by renewed clashes between the military and demonstrators, and free polls in Libya remain some way off. Beyond the Middle East, meanwhile, many autocracies survived the year intact.

But the pessimism should not be overdone either. Building democracies from the rubble of fallen dictatorships was always going to be a painstaking process. And even those autocracies that made it through 2011 in one piece were not impervious to the ripples of the Arab spring. Nervy crackdowns on dissent in both Russia and China were a telling reminder of the fundamental fragility of any system that rules without the consent of the governed.
Furthermore, the significance of the revolutions of 2011 lies not merely in their success in sweeping away corrupt regimes. Just as importantly, the uprisings – those that succeeded, and those still continuing – were a reaffirmation of the enduring global appeal of the democratic idea, and the values of freedom and equality it enshrines.

To prosper, however, democracies must meet the needs of their people. Over the next year, the new leaders of the Arab world must establish the institutions necessary to guarantee the rights and freedoms for which their citizens have fought. Just as importantly, they will have to jump-start their countries’ faltering economies. Unless people quickly see an improvement in their lot, there is a risk that democracy will struggle to take root.

Established democracies also have much to prove in 2012. In the last year, countries on both sides of the Atlantic have grappled hopelessly with problems that should not be insoluble. In the US, attempts to revive the economy and rein in mushrooming public debt have been hobbled by partisan feuding. Europe’s leaders have been almost as inept in the face of their own political and economic crisis. It is not surprising that this year’s tide of global protest swept through Athens, Madrid and New York, as well as Tunis, Cairo and Benghazi. That the democracies survived while their authoritarian counterparts collapsed is a testament to two of the key strengths of the democratic system. It provides room for dissent. And it is better than most other systems at getting rid of failed rulers.

In 2012, a number of countries not blessed with these advantages face critical transitions. In some places, autocratic regimes may manage to remain in power. But from a global perspective, there is room for hope. When Mr Fukuyama gave his speech, the world contained 69 democracies. Today there are close to twice as many. The march of democracy is not finished yet.
Posted by 混沌 at 下午2:15