PRINCETON – What began in Syria as a revolt against an oppressive regime has evolved into a sectarian civil war and, more recently, into a proxy conflict. In the process, the struggle has become increasingly convoluted, with conflicting agendas among allies, together with deep-seated communal tensions, rendering the situation nearly intractable. 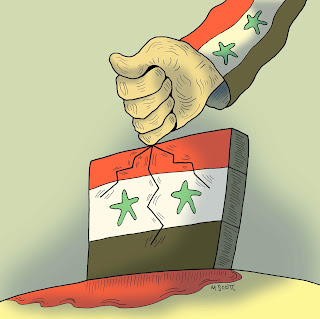 On one side, the United States, the European Union, Turkey, Jordan, Saudi Arabia, and Qatar are backing the opposition – a welter of armed factions with diverse agendas and ideologies that range from Syrian nationalist to global jihadi. This disunity reflects the fissures in Syrian society, a result of more than four decades of brutal authoritarian rule.

On the other side, Russia and Iran (and its proxy, Lebanon’s Hezbollah), each for its own reasons, are supporting President Bashar al-Assad’s regime. Russia’s motivations are tied to the legacy of the Cold War. The Assad regime has consistently adopted an anti-Western stance, aligning itself with the Soviet Union and later with Russia. Today, Syria represents Russia’s only remaining toehold in the Arab world, while all of Assad’s regional opponents are US allies.

Iran’s involvement reflects a different, much older struggle – that between Sunni and Shia for control of the Middle East. With Shia-dominated Iran providing weapons, money, troops, and training for Assad’s forces, the conflict’s sectarian dimension has taken on greater significance. Indeed, government forces have devolved into a sectarian army, motivated by the fear that, if the largely Sunni rebels are victorious, they will annihilate the Shia-affiliated Alawite minority that has ruled Syria for decades.

As it stands, Assad’s regime possesses an overwhelming military advantage, with an air force, tanks, missiles, and chemical and biological weapons. In order to defeat them, the opposition needs more sophisticated weapons – and its backers are ready to oblige. Turkey, Saudi Arabia, Jordan, and Qatar – all Sunni-led countries – have sharply increased their military aid to the Syrian rebels in recent months. Even the United States, which has so far refused to provide lethal aid for fear of arming global jihadis, recently announced that it is working on a plan to deliver weapons to opposition forces.

Sunni-Shia tensions tend to rise sharply during geopolitical power struggles, such as in Iraq in 2006-2008. Prior to that, the last great Sunni-Shia battle in the Middle East involved near-constant war between the Sunni Ottoman Empire and Iran’s Shia Safavid Empire during the sixteenth and seventeenth centuries. The Ottomans won by a small margin, ultimately securing control over Iraq. But the protracted conflict contributed to the decline of both empires and devastated Iraq, leaving behind a deep sectarian cleavage.

This does not bode well for Syria. Since the 1970’s, the Assads have failed to foster Arab nationalism in order to unite the religiously divided population, resorting instead to divisive sectarian politics to control Syria’s population. While ensuring that their Alawite allies filled key positions in the military and intelligence services helped the Assads to retain their grip on the country, it was a strategy that widened and reinforced the Sunni-Shia rift among the population.

When the Arab Spring began to unfold, Assad adopted the same approach, hoping that it would rally his Alawite supporters and scare the rest of the public into submission. This time, however, the plan backfired. Syria’s Sunni population, inspired by the revolutions in other Arab countries and outraged by the regime’s brutality, simply stopped being afraid – a potentially game-changing development for Arab authoritarianism.

Now, the consequences of the Assads’ failure to promote a shared national ideology are becoming fully exposed. Syria’s Sunnis are increasingly invoking theology to justify hatred of the Shia minority, and forms of Sunni exclusivism, similar to Al Qaeda’s ideology and worldview, are becoming the norm. While Assad has secured the Alawite community’s renewed support, he has done so at the cost of increasing the very real danger that the rebels will punish all Alawites for the regime’s crimes. As the war grinds on, prospects for a negotiated solution are diminishing.

As Iran throws its weight – and billions of dollars – behind the Alawites, and the Gulf States do likewise in support of the Sunnis, Syria is being torn apart. Soon, it will be too far gone for either side to be able to claim victory.


Bernard Haykel is Professor of Near Eastern studies at Princeton University.